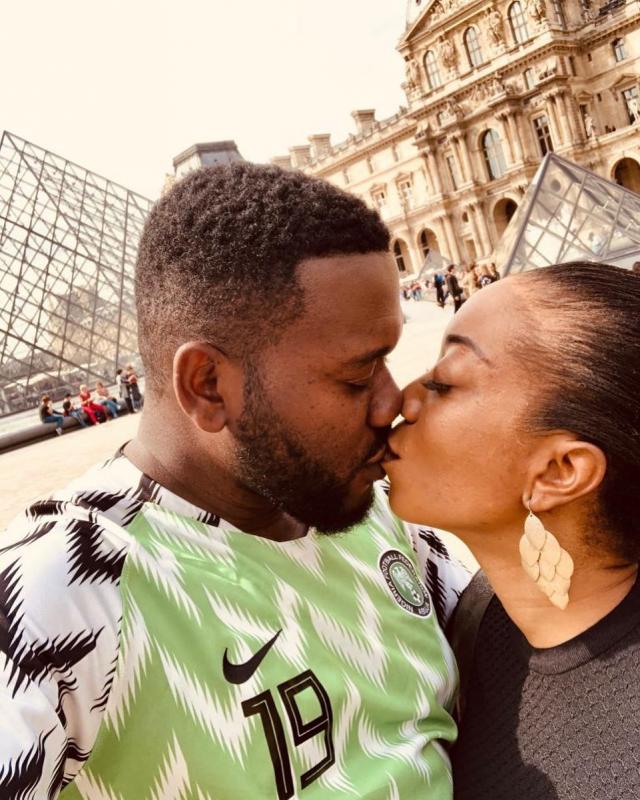 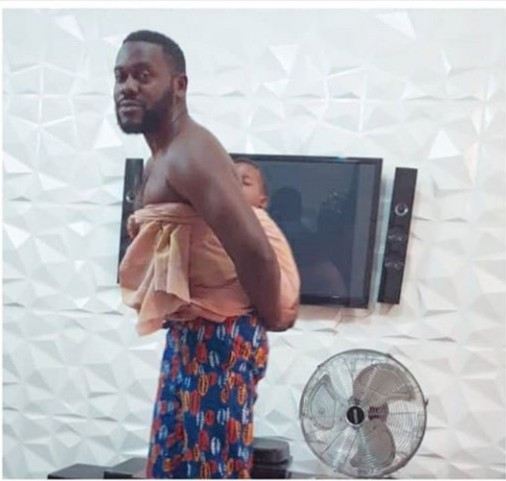 Nollywood actor, Deyemi Okanlawon has flaunted a picture of himself carrying his kid on his back.

The movie star who is married to Damilola Okanlawon flaunted a picture of himself on daddy duty alongside these words, “That’s how dads do… happy holidays to all the real men ouchea doing both daddy and mummy work! God bless your hustle! ??‍????‍??#daddyduties #whosyourdaddy.” 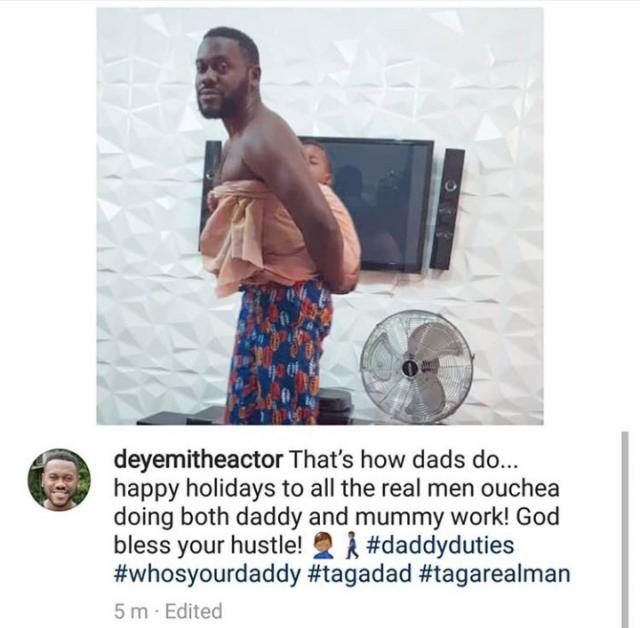 Deyemi Okanlawon is a Nigerian film, television, theatre and voice actor. He is best known for his roles in the TV Series Gidi Up and An African City and featured in Movies, If Tomorrow Comes and Road to Yesterday as well as his cameo appearances in a number of Nigerian music videos including No be You by Waje and Soldier by Falz The Bahd Guy.

Okanlawon was born in Lagos, Southwest Nigeria to an Aircraft Engineer father Adeyemi Okanlawon, and Adeyinka Okanlawon a baker and entrepreneur. He had his primary school education at Taikenny Nursery and Primary School in Lagos, and his secondary education at International School, Lagos. He then went on to study Chemical Engineering at the University of Lagos, Lagos, Nigeria. A former baker and sales and marketing executive he also obtained a Certificate in Acting for Film, from the New York Film Academy.

Okanlawon had his first experience with acting at the age of 5, when he featured in an ‘end-of-year’ play while in primary school. At the age of 9, Okanlawon featured in a nationally syndicated Television commercial with Kunle Bamtefa. While at the University of Lagos, Okanlawon became an active member of the drama groups Gf(x) (Harvesters Company), Xtreme Reaction and Snapshots (Covenant Christian Centre).

Okanlawon made his feature film debut in the 2010 movie ZR-7, before which he featured in a short film titled A Grain of Wheat. He went on to feature in and co-produce many more short-films and by 2012 he had gained notoriety for his numerous appearances in made-for-internet short films and web series including Blink, 6:30pm and Knock Knock. In 2013 he switched careers to focus on acting full-time and has since featured in over 50 film credits, 8 stage credits and has appeared in OLX and GLO Television commercials as well as music videos for Waje and Aramide. He has also had roles in movies such as Greg Odutayo’s “Beyond Blood” starring Joseph Benjamin and Kehinde Bankole; Pascal Amanfo’s If Tomorrow Never Comes starring Yvonne Nelson, Ishaya Bako’s Road To Yesterday starring Genevieve Nnaji and Majid Michel and Pascal Amanfo’s No Man’s Land starring Adjetey Anang. He was in NdaniTV’s series Gidi Up with OC Ukeje, Titilope Sonuga, Somkele Iyamah and Joke Silva. He has also featured in the TV Series Taste Of Love, Lekki Wives, An African City and Dowry.

In 2013, he won the award for Best Actor in a Short Film at the In-Short film festival for his role as a psychotic husband in the thriller, Blink.

Maguire Is A Leader – Pogba

Nigerian Soldiers Must Be Loyal And Obedient – Tukur Buratai

I Expose My Skin Now Because Of My New Sound – Omawunmi